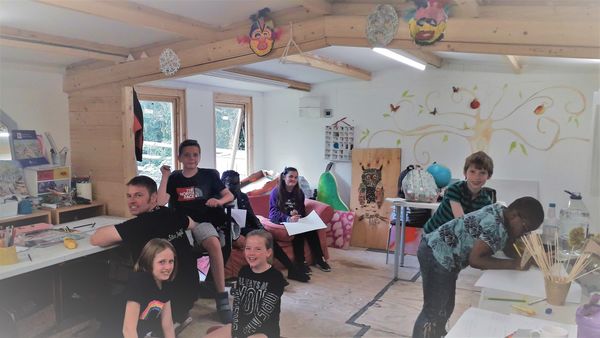 We had a great time last week at Brogdale CIC's Walled Garden Site last week as we hosted a Drama Workshop! Young people are so creative and they were quickly thrown into action and creative ventures as we played drama games, got to know each other and thought about character creation.

The day started with some warm up activities (including time on the park equipment) and we began to think about how different types of characters might move and behave and how we would build that into our drama. We had some great spy activity - and many of them must have experienced loosing their mobile phone!

The group then began to think about their own character and who they wanted to be. We had some fun with introducing our characters through mime, using toys, telling stories and mind mapping. We then had a great game of Macgyver but turned it into making plays. One team were locked in a garage with a ticking bomb and only a pair of pants, a dishwasher and a toilet to get them out - they showed great creativity in their escape! By this time we were ready for lunch and the sun had come out so we were able to sit outside. We also found out how the eco toilet works at the garden!!

After lunch we began to think about plot and how all the characters would come to be together. All the group chipped in ideas as we created a short skit about toys who find themselves left behind in a toy store with a dastardly but thankfully unobservant cleaner!

We love putting on our drama workshops and would love to hear from you if you want to join us next time!